Young Alphonse Mucha left for Vienna where he worked as an apprentice draughtsman for a studio which designed and decorated theatre scenery. Upon his return to Moravia his talent was spotted by the wealthy Count Karl Khuen-Belasi, who enabled him to study at the Akademie der Bildenden Künste in Munich. Mucha continued his studies in Paris. He made extra money drawing illustrations for magazines and advertisements. Quite unexpectedly this proved to be his big break. Mucha became the most in demand illustrator of the Belle Epoque. 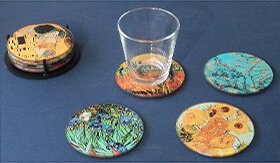