During his lifetime Kunisada was considered one of the greatest ukyio-e artists. As a son of a rich merchant from Edo, he learnt his trade in the prominent Utagawa Toyokuni studios. After publication of his first portraits of Kabuki actors in 1808, his fame rose to great heights. Commerically he became the most successful wood block print artist ever.

Ukiyo-E
The world portrayed by the art of Japanese printing can be captured under one romantic, by origin Buddhist, name - Ukiyo-e, or the floating world. It’s a world of brief amusement and pleasure - of daily life like it took place between the 17th and 19th century in theatres, on the street and during parties and festivals. 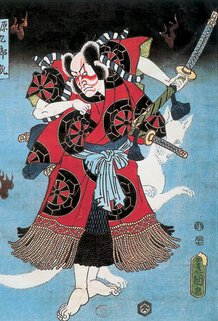