Egyptian faience was often used to make funerary statuettes. It is a ceramic that consists mainly of quartz and is very easy to glaze. The addition of copper lends it its blue-green colour.
Images of hippopotami - often decorated with stylised lotus leaves - accompanied the dead. The hippo was viewed as a symbol of new life and fertility because the Nile constituted Egypt’s aorta.

Hippos were also dangerous and were associated with Seth, the god of evil and chaos. Hippopotami attacked fishermen and trampled fields along the Nile. It was also an animal to befriend in the afterlife as it could protect the deceased from the omnipresent dangers. One or more legs were often broken of the statuette before it was placed in the grave to avoid the animal turning against the individual. 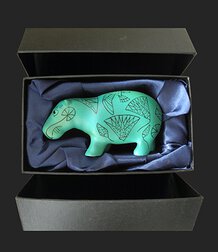